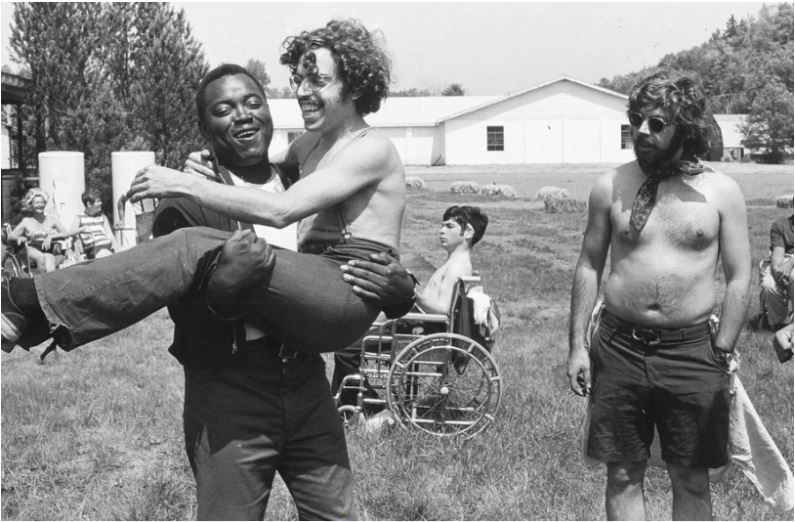 1. You’re stuck inside and it’s a feelgood documentary. Crip Camp is about an unintentionally visionary “summer camp for the handicapped run by hippies,” as the film’s co-director (and former camper) Jim LeBrecht explains early on.  A sound designer with spina bifida, Lebrecht shot much of the film’s early footage with a camera strapped to his wheelchair. The world it captured is joyous and liberating.

2. Crip Camp shows people seeing and listening to each other across difference. The campers’ race, gender, families, and socioeconomic status varied widely, as did their impairments: epilepsy is not like cerebral palsy, or polio, or depression. At Camp Jened, people with profound speech impediments got heard, people in wheelchairs made out, people on crutches played baseball. At the time, the 1970s, people “like them” were routinely hidden from sight and denied access to schools, jobs, and public spaces. These campers were treated like whole people who counted.

3. Crip Camp shows what grassroots activism can do. LeBrecht headed into the project with a hunch that Jened played an outsize role in the disability rights movement of the late 70s and 80s, and he was right. In an interview in the Guardian, disability rights crusader Judy Heumann, who attended in 1971 at age 15, recalled, “This camp is where we had those conversations in the bunks late at night that made us realize, hey, there’s this civil rights movement going on around us, why aren’t we a part of it?” That camp experience—of seeing and being seen, of glimpsing a radically different and inclusive future—launched a generation of activists.

4. Crip Camp shows the Capital Crawl, the most affecting act of civil disobedience ever, and arguably most effective. On March 12, 1990, frustrated by years of legislative inaction, more than 60 activists abandoned their crutches, walkers, and wheelchairs and began crawling up the 83 stone steps that lead to the Capitol. Four months later, Congress passed the Americans with Disabilities Act.

5. Crip Camp reveals our internalized bias. As non-disabled camp director Larry Ellison says, “We discovered the problem wasn’t people with disabilities, it was our problem.” Disability rights advocates use the term “non-disabled” because the likelihood of acquiring a disability, temporarily or permanently, is statistically very high for all of us. Pretending otherwise feeds both ableism (discrimination against people with disabilities) and ageism. It reinforces dual stigma: “I may be old but at least I’m not crippled!” and vice versa. Seeing ourselves as “non-disabled”, or even “temporarily able-bodied,” has the opposite effect. It reminds us of what we have in common, and that a world that works better for people with disabilities—who come in all ages, after all—works better for everyone.

6. The pandemic makes Crip Camp’s message an urgent one. COVID19 has glaringly exposed the ageism and ableism all around us. Olders and people with disabilities. along with people with underlying health issues, are dying at disproportionate rates because we are more physically vulnerable and because we are considered more expendable, so this awareness comes at a hideous human cost. We have a historic opportunity to build upon this awareness. It’s time for olders to ally with the disability justice community and people with chronic illness by insisting on equal access for all to protection and medical treatment. (Peter Torres Fremlin’s Disability Debrief lays out an inclusive response to the pandemic.) It’s also time to remove longstanding barriers to access and opportunity. For example, accommodations enabling people to work remotely, which people with disabilities had requested for decades, magically became possible once the health of the general public was a risk. These accommodations need to be permanent.

Achieving equal rights for every human being, independent of age and physical condition, means addressing the intersection of ageism and ableism. This reckoning is long overdue and tactically necessary, for reasons I’ve been writing about for a while. The pandemic makes it ethically imperative and terrifyingly urgent. It’s time to build on what we learned at Crip Camp, whose campers went on to change the way we see disability, changing it from a personal misfortune to a social problem: “The problem is not that I’m in a wheelchair, the problem is that there are stairs between me and where I want to go.” Boom. That’s what we need to do around aging: “The problem is not that I have wrinkles, the problem is that I’m being discriminated against because of it.” It’s time to join forces, demand equal access and equal rights, and enforce them as the pandemic recedes into memory.

Learn more by reading This Chair Rocks, by Ashton Applewhite.

PrevWhat Happens if You Live to 100?
Accepting LimitsNext

Ashton Applewhite
Author and speaker ASHTON APPLEWHITE is a leading voice in an emerging movement dedicated to dismantling ageism. It's time to be proud of your age no matter how old you are. The author of This Chair Rocks and a TED2017 mainstage speaker, she reveals the untapped possibilities of late life—in our communities, at work, and in ourselves. Visit Ashton's website here.
More by this Author

1. You’re stuck inside and it’s a feelgood documentary. Crip Camp is about an unintentionally visionary “summer camp for the handicapped run by