Oh, to be young again…Really? Recently, a friend sent me letters I had written to her during our first year in college. In one letter, I wrote: “I went to a meeting last night that will change my life forever. I learned about institutional racism:  we are all racists.” The following week I wrote, “I am done with that, but a really cute boy sat next to me in art history.” Was I really that shallow and self-absorbed? I guess so. In another letter, I said, “We should start a French-speaking commune. We could grow our own food, speak only French and at night we could show Truffaut movies.”

In one letter, my friend wrote that she was depressed. Ever the competitive Girls High girl, I wrote back that I was more depressed than she was depressed. I was competing about depression? Clearly, my empathy skills were not yet highly developed.

I was a college freshman during some of the most pivotal events of the 21st century: the Vietnam draft lottery, man walking on the moon, Woodstock, educational bastions like Yale admitting women, the DNC convention in Chicago, the first ATM, founding of PBS, the first withdrawal of troops from Vietnam, invention of the first micro-processor. Amidst all of this, I wrote about how many calories I had consumed that day, obsessed over my GPA and worried about course selection. As I looked at what was important to my 19-year old self, I was disappointed in my values, shocked at how mercurial I was, and struck by the fact that I didn’t seem happy. Being young was way harder than I remembered. 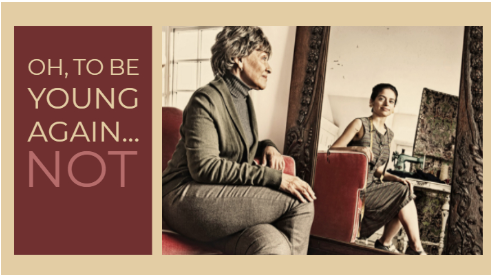 I realized that I am happier now than I was when I was young, and it turns out, I am not alone. In a study by the Journal of Clinical Psychiatry, researchers found that young people report the highest levels of depression, anxiety and stress, and the lowest level of happiness, satisfaction and well-being. In spite of stiffening joints, weakening muscles, fading eyesight, clouded memory and the modern world’s contempt of aging, old people are surprisingly the happiest. Across countries and cultures, research results are remarkably similar: older adults are happier than younger people. The increased happiness and greater sense of well-being, moreover, are not the result of external circumstances, but of internal changes.

It seems that older people are better at controlling their emotions, accepting misfortune and are less prone to anger. In one study, subjects were asked to listen to recordings of people saying disparaging things about them. They found that older people were less angry, often taking the view, “You can’t please all the people all the time.” This resonates with me. Years ago, I would have been devastated if someone didn’t like me. Now, I think: “Lots of people don’t like me; get in line.”

Do I want to be young again? No. Like essayist/screenwriter Nora Ephron, I do feel bad about my neck, but it is what it is. Perhaps acceptance of aging is itself a source of relief. As William James observed, “How pleasant is the day when we give up striving to be young, or slender.” 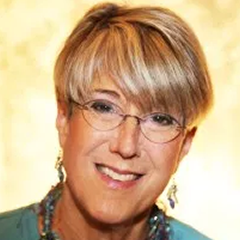 Margit Novack
Margit Novack is an entrepreneur, thought leader in aging, and pioneer in Senior Move Management. Her goal is to create a positive perspective about getting older, not to sugarcoat reality, but to combat pervasive negative stereotypes about aging and to share the potential for growth and possibility.
More by this Author

Oh, to be young again…Really? Recently, a friend sent me letters I had written to her during our first year