The Best Diet for the Inflammation of Aging

One of the most recognized consequences of aging is a decline in immune function, illustrated by vulnerability to dying from the flu and poor response to vaccinations. But, about 20 years ago, a paper was published showing that the immune cells of 80-year-olds produced significantly more pro-inflammatory signals.

As I discuss in my video, How to Counter the Inflammation of Aging, this suggests the worst of both worlds—a decline in the part of the immune system that fights specific infections and an aggravation of nonspecific overreactions that can lead to inflammation. This has since been formalized in a concept referred to as a chronic low-grade inflammation that we now know is typical of aging, which may be responsible for the decline and onset of disease in the elderly.

So, what can we do about it? Inflamm-aging appears to be a major consequence of growing old. Can it be prevented or cured? “The key to successful aging and longevity is to decrease chronic inflammation without compromising an acute response when exposed to pathogens.” How do we do that? Nutrition. What we eat is “probably the most powerful and pliable tool that we have to attain a chronic and systemic modulation of aging process…”

The reason meat is associated with inflammation may be because of both the animal protein and the animal fat. In the first interventional study that separately evaluated the effects of vegetable and animal protein on inflammatory status, researchers found that “a higher intake of animal origin protein—specifically meat—is associated with higher plasma levels of inflammatory markers in obese adults…”

In contrast, whole plant foods have anti-inflammatory effects, though some plants are better than others. Folks made to eat five-a-day of high-antioxidant fruits and vegetables, like berries and greens, had a significantly better impact on reducing systemic inflammation and liver dysfunction compared those eating five-a-day of the more common low-antioxidant fruits and veggies, like bananas and lettuce.

You can learn more about arachidonic acid in Chicken, Eggs, and Inflammation and Plant-Based Diets for Improved Mood and Productivity.

More on battling inflammation in:

And more on healthy aging in: 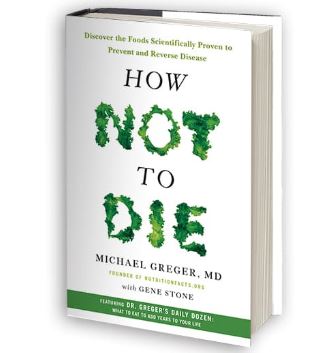 Read Dr. Greger’s Best Selling book: How Not To Die. Click the book for purchase information.

In addition to showing what to eat to help prevent the top 15 causes of death, How Not to Die includes Dr. Greger’s Daily Dozen—a checklist of the foods we should try to consume every day. Full of practical, actionable advice and surprising, cutting edge nutritional science, these doctor’s orders are just what we need to live longer, healthier lives.

All proceeds Dr. Greger receives from all book sales are donated to the 501c3 nonprofit charity NutritionFacts.org.

The Best Diet for the Inflammation of Aging

One of the most recognized consequences of aging is a decline in immune function, illustrated by vulnerability to dying from