The Power of Music

Conductorcise has taken on wings. A company named SilverFit invited me and the Conductorcise program to Holland. SilverFit produces games, with stat of the art technology for Senior Centers and rehabilitation venues. Through much research and in collaborating with a software company in Brussels, they developed a game that is now being implemented in Care Centers in Holland. The technology is one step above the Wii. It is called “Imagery”. Without the use of a remote, as in the Wii, there is nothing held in the hand. A camera captures the movements and one is free to use any part of the body without being encumbered by having to hold a remote or anything else in the hand.

The programs have been researched by physicians and wellness experts and then put into use in care facilities. SilverFit, after months of discussion via email, was interested in observing the Conductorcise program first hand. They wanted to see Maestro “LIVE AND IN ACTION”, and they certainly did.

On arriving in Amsterdam, my wife Susan and I were greeted by Joris and Maaike, the founders and owners of SilverFit, two young, intelligent, compassionate individuals. We had meetings and made plans for the Care Center I would visit in Roosandaal, outside Amsterdam. The venue was called Wiekendael. It was one of twenty care centers under the larger umbrella of Groenhuysen. All centers for rehabilitation, independent, assisted and nursing are funded by the government. I was curious to see what kind of venue it would be. For some reason I was picturing dismal venues. How incorrect I was. The building itself was full of great vibrations, light open rooms, sparkling clean, smiles on residents and staff alike. Rolf, a physiologist, was in charge of exercise programs designed to create speedy recovery for rehabilitation residents, as well as provide correct exercise for the balance of the residents.

My wife and I speak no Dutch, a very difficult language. After purchasing “Dutch for Dummies” and trying to learn appropriate language to be able to communicate, we elected to take our chances with a few words in Dutch, greetings and such, and go with English. The fact is that great majorities of people, young and old, in Amsterdam, speak English. They are a very warm and understanding population. However, we were outside of Amsterdam and in a community of older people. English was not the language. I was told that the Dutch can be a very cautious people that warm up to one only after knowing them for a time. I certainly had concerns about whether my style of presentation would be effective.

Fortunately, I was provided with a wonderful young man who was my interpreter. I had some discussion with him before the presentation. It was very informal, as is the program. To my delight, the audience of 90 plus people responded the same way American audiences respond. So now I say, “WHY NOT?” They loved the MUSIC. They responded to the energy and they even liked the jokes! It was an experience of a lifetime. The staff was wonderful. They fully participated in the program, conducting away and smiling and fully enjoying the experience. After the program a staff member told me that to my left, in the first row, were all Alzheimer patients. I did notice that when we conducted to Johann Strauss Jr’s. waltz “Voices to Spring”, two members of this group stood up and started to dance. The staff member was astounded, as these particular peo;oe had not moved in months. This displayed the power of MUSIC, the connection of that part of the brain that is not diseased, the reconnecting of wiring, broken or lost. Amazing.

I spoke with a number of the residents after the program, beautiful people, a few of which did speak English. I had a long conversation with one man who was in rehabilitation for replacement of his hips. He was a soccer enthusiast and one who participated in the sport as well. He no longer could be involved in that sport. He was brought to tears by the music and motion of the program. Such warmth and sincerity brought tears to my eyes. Rolf sent me a note afterwards telling me that a number of men were brought to tears because of the music and energy of the program. He ended his note by saying “and these were Dutch men”. I do believe with all my heart that music, movement, joy, and education transcend any language barriers.

We are now engaged in the possibility of creating a gaming program using Conductorcise. Will let you know as things progress. Another very exciting bit of news is that I am working on a project with another gentleman I met in Holland to present Conductorcise to a European market.

To conclude, it was not all business in Holland. We were able to travel to Brussels and Brugge, two interesting cities in Belgium. I end by once again stating how blessed I am at being able to reach out to so many and to derive such joy and satisfaction from this program. To tell you that I have LEARNED so much in these past years and that I have so much more to learn. 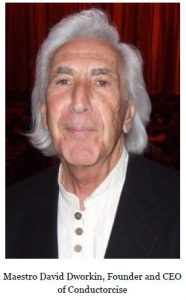 David Dworkin created CONDUCTORCISE, a fitness fusion workout for mind, body, and soul. His award winning program has earned a stellar reputation with participants, medical professionals, and has proven effective with Alzheimer’s and Parkinson’s patients.

Maestro, David Dworkin is a graduate of The Julliard School and Columbia University Teachers College. He is a member of American Senior Fitness Association, the American Society of Aging, and a Master Champion selected by the International Council on Active Aging to put forth their initiative on “Changing the Way We Age.” 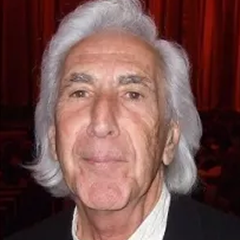 David Dworkin
Maestro, David Dworkin is a graduate of The Juilliard School and Columbia University Teachers College. He is a member of American Senior Fitness Association, the American Society of Aging, and a Master Champion selected by the International Council on Active Aging to put forth their initiative on "Changing the Way We Age." Dworkin created "fitness fusion" CONDUCTORCISE", A sound workout for mind, body, and soul. His award winning program has earned a stellar reputation with participants, medical professionals, and has proven effective with Alzheimer and Parkinson patients.
More by this Author

The Power of Music