This is the story of how 82 masterpiece quilts, made about 100 years ago by Amish women in Lancaster County, left Pennsylvania … and came home again.

In the early 1970s, antique American quilts began to be appreciated for their graphic qualities. Until then quilts were generally understood as simply functional bedcoverings and their beautiful designs were not much thought about.  In the final decades of the twentieth century, however, people began to see and appreciate quilts as works of art.

Quilts were collected in great numbers, and were as often hung on walls, like paintings, as they were used on beds.  Quilts began to be featured in art galleries, and some major American museums, including the Whitney Museum in New York, made them the focus of art exhibitions. 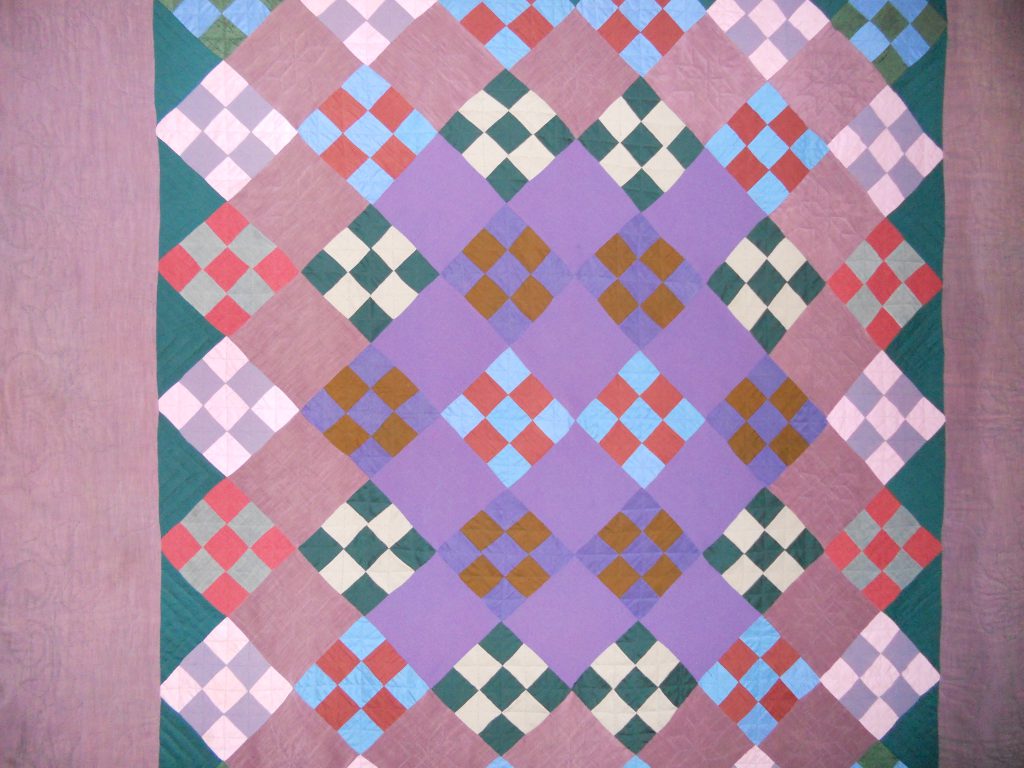 The distinctive quilts made by the Amish women of Lancaster County, Pennsylvania between about 1880 and 1950 were among the most prized by collectors.

Amish women had created quilts of remarkable strength, power and simplicity that were now recognized as major works of American art. The Lancaster Amish . . . assembled blocks of store-bought, uniformly colored wool, bought by the yard, and from them created America’s first major abstract art,” the noted art critic Robert Hughes boldly asserted in his book American Visions: The Epic History of Art in America. “[Their quilts have] a soft, swaddling minimalism, in which one recognizes a spareness of design, just pulled back from dogmatic rigor by its inventive quirks, a magnificent sobriety of color, and a truly human sense of scale.”

At the end of the twentieth century, the quilts made by the women of this one particular Amish community in southeastern Pennsylvania, during that 70-year period, were purchased out of farmhouses by pickers and dealers and sold to collectors all over the U.S., Europe and beyond. Within a couple of decades, almost all of the older Lancaster County Amish quilts had new homes.  Demand for these quilts was so great, that nearly every old quilt left Lancaster County. 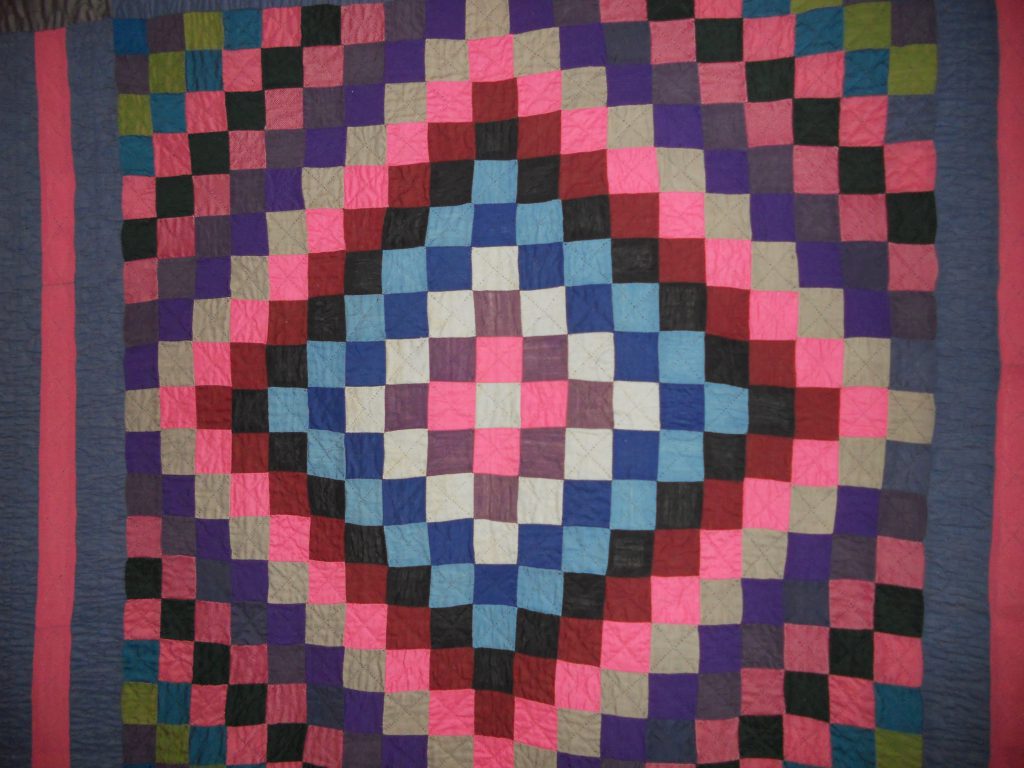 One of these collectors was a young man in San Francisco.  Doug Tompkins was in his thirties when he and his wife, Susie, began a women’s sportswear business they called Esprit de Corp. Doug had grown up with art, and he started buying art when still a boy.  So when he first saw Amish quilts, he immediately recognized their beauty, historical importance, and design significance.  He chose graphic American quilts for his clothing company’s art collection and made classic Lancaster Amish quilts its focus.

Cover of Amish: The Art Of The Quilt

That same year, Doug created a coffee table-sized art book on his Lancaster County Amish quilts, and he also organized a major exhibition of them at The Fine Arts Museums of San Francisco. Both the book and the exhibition included 82 carefully selected quilts sharing the title “AMISH: The Art of the Quilt.”  The collection was very well received, both critically and popularly.

A few years later, Doug sold his half of Esprit to his wife and changed the focus of his life from business to environmentalism. He moved to a remote part of southern Chile and it became Doug’s intention to liquidate his entire collection—in whole or quilt-by-quilt—in order to invest in his newly found passion. 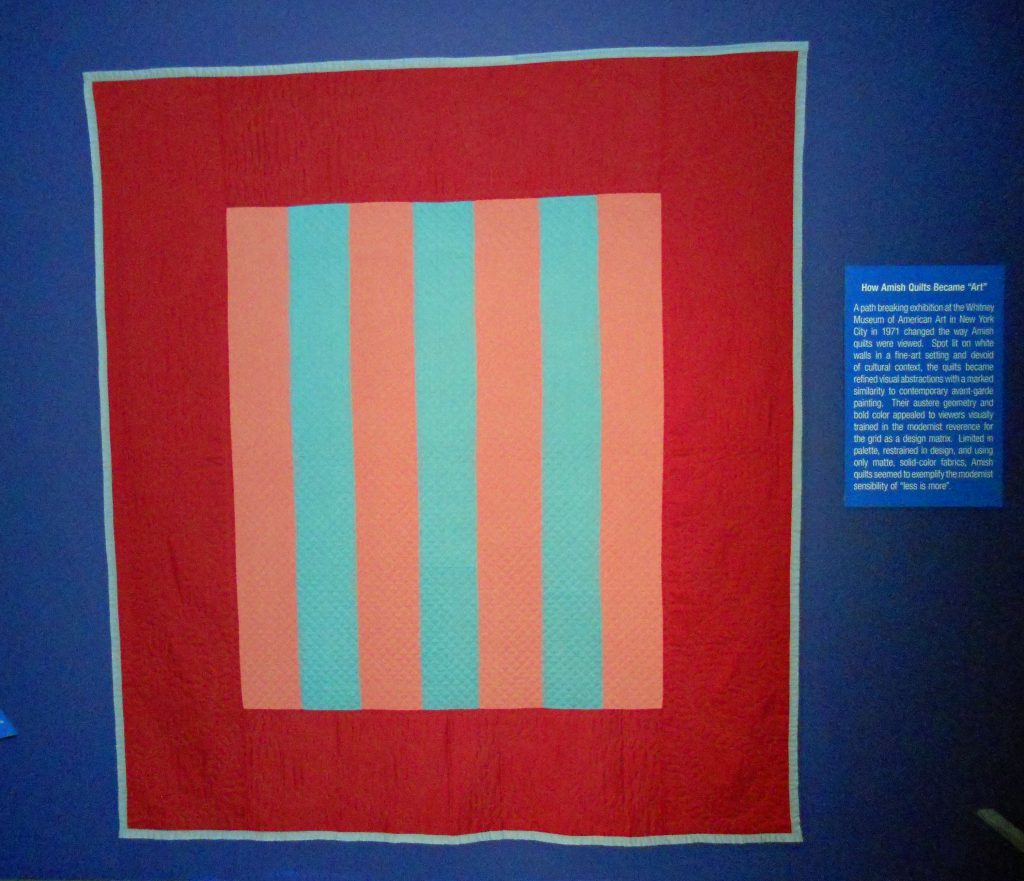 Fortunately, in 1974, an organization had been formed in Lancaster County with the sole purpose of collecting and preserving Lancaster’s rich artistic heritage.  Keen observers had recognized that much of Lancaster’s great art had already left Lancaster County and was now in the hands of private collectors, like Doug, or in major US museums.  It was the Heritage Center’s mission to return these masterpieces to the community.

And so it was, through a series of small miracles, the magnificent collection of “Doug’s” quilts made the 3,000-mile journey back home to Lancaster County.  In 2002, with the help of some very committed Lancaster citizens and the support of the Lancaster community, the Heritage Center of Lancaster County was able to purchase the iconic collection of “Esprit’s” 82 best Lancaster Amish quilts that had been selected for the book and exhibition.  The quilts, seemingly lost to Pennsylvania forever, came home together, where they belong.

So today, with these masterpieces in hand, the Museum is returning to the community with another appeal.  You can help raise funds for the endowment of this collection — funds that will generate annual income for the quilts’ ongoing care, exhibition, and home in Lancaster County.  With this perpetual funding source in place, the quilt collection will continue to tell its story in exhibitions and educational outreach programs for the pleasure of Lancaster’s residents and visitors—and through the development of traveling exhibitions, become Lancaster County’s most colorful and storied ambassadors.

Prev9 Tips to Jump Start Your Retirement
Best of Both Worlds: Isamu NoguchiNext 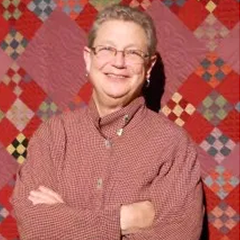 Julie Silber
Julie Silber is one of the world's most respected quilt experts. She has been selling antique quilts to museums, businesses, and individuals since 1968. Julie was the curator of the world renowned Esprit Quilt Collection in San Francisco and is the co-author of the critically acclaimed books, "Hearts and Hands" and "Amish: The Art of the Quilt".
More by this Author

This is the story of how 82 masterpiece quilts, made about 100 years ago by Amish women in Lancaster County,