Slowing Down The Clock

Ronald Glass, a forty year-old businessman who weighs the same as he did in college, is understandably irritated as he tries on a new pair of slacks at his local department store. “They’re cutting corners everywhere these days,” Ron muses as he attempts to button the waistband.

Is Glass the victim of a sizing scam?

He should be so lucky. The fact is, Ron hasn’t exercised since his school days and so, even though his weight’s the same as it was when he pledged Sigma Chi, his body composition has changed considerably. At the rate of half a pound of muscle loss a year, Ron Glass has lost ten pounds of muscle while accumulating ten pounds of fat. True, the net gain is zero, but the truth is, the change represents a twenty-pound shift in body composition, a change which has significantly effected not just his waistband size, but his physical appearance and physical capacity as well.

Fortunately for Glass, those changes are reversible with a minimal investment in sensible strength training, even though the aging process reduces our functional capacity in a variety of ways.  Simply stated, we tend to slow down as we grow older. These changes are not only predictable, but measurable. For example, reaction times of the nervous system slow down, and the cardiovascular system ticks off a lower maximum heart rate with each passing year. These physiological changes oc­cur in all men and women, and are largely unaffected by exercise.

Other changes, however, can greatly affect our functional capacity. Exercise in particular can dramatically effect our cardiovascular endurance and muscular strength.

Recent studies have demonstrated that regular endurance exercise can maintain our aerobic capacity well into middle age. Competitive masters runners in the 40-49 age group, the 50-59 age group, and the 60-69 age group were found to have very similar levels of oxygen utilization, or ‘maximum oxygen uptake.’

Twenty-four of these same masters runners were tested ten years later. Those who maintained their competitive training pro­gram showed no significant reduction in maximum oxygen uptake.

It appears then, that establishing a rela­tively high level of endurance may effectively delay the aging process with re­gards to our aerobic capacity. And for those of us who are more sedentary, regular endurance exercise can produce significant improvements in aerobic capacity.

Several research studies have also indicated that sensible strength training can maintain musculoskeletal fitness well into middle age. In fact, it’s been demonstrated that, for most of us, it’s possible to gain muscle strength and add muscle mass at any age.

Very few of us have the genetic potential to attain a heavily muscled body, and so most of us need not concern ourselves with the overbuilding of muscle, rather, we should take appropriate steps to prevent losing too much muscle as we age. Re­search shows that adult males lose about a half pound of muscle every year due to lack of use. And sedentary types lose muscle tissue three times as fast as people who maintain a reasonable level of fitness.

We are, most of us, not even aware of our muscle loss for several reasons. First, because the reduction in muscle mass occurs so slowly, it’s not observable day-to-day, or even week-to-week. Also, our body-weight does not usually decrease be­cause most of us, like our friend Ron, add fat at the same rate, or an even faster rate than we lose muscle.

Because the muscles serve as the chas­sis of our body, a gradual loss of muscle mass inevitably effects our physical ap­pearance. Even without an accompanying gain in fat, muscle loss results in a soft look that indicates a low level of physical fitness.

In another recent study, seventy-two participants in a weight-loss program were assessed to determine the effects of exercise on body composition.  Although all participants followed the same dietary regimen, exercise programs varied.

Those who performed only endurance exercise experienced an average loss of three pounds of fat and a half a pound of muscle during the eight-week training period. Those who performed both endurance exercise and strength exercise lost an average of ten pounds of fat and gained two pounds of muscle during the same period of time. In other words they not only improved their body composition by twelve pounds, they enhanced their physical appearance and sense of well-being too.

Our muscles function as the engines of our bodies, releasing energy, producing power and performing movement. Consequently, loss of muscle reduces our capacity to work, play and carry on everyday activities. In a sense, the aging process is analogous to the power loss you would experience moving from a vehicle with an eight-cylinder engine, to a six-cylinder engine and then to a four-cylinder engine. It’s like starting out with a finely tuned Corvette and ending up with a worn-out Volkswagen.

Fortunately, the ability to increase muscle mass and physical capacity is not limited to young adults. In another study, men between sixty and seventy-two years of age were examined before and after twelve weeks of strength training. The thirty-six exercise sessions produced in participants a 9 percent increase in quadriceps muscle size, and an over 100 percent increase in leg strength assessments. Although it is not possible for a seventy-year-old to function like a twenty-year-old, it is encouraging to know that muscle size and strength can be improved at any age through minimal strength training—as little as twenty minutes, three times a week.

Muscle, a very active tissue, has high energy requirements in order to provide for protein synthesis and rebuilding. And this ongoing maintenance effort is costly: every pound of muscle utilizes some fifty calories per day at rest. Because muscle loss and metabolic reduction go hand-in-­hand, if you choose not to work out using resistance exercises, you should cut back at the dinner table. Just as a VW engine requires less gas than a Corvette engine, smaller muscles require fewer calories than do larger muscles. This is just as true during rest as during activity. Even when we’re asleep, our skeletal muscles account for over a quarter of our total calorie utilization.

Because bone density and muscle mass are directly related, slack muscles may be responsible for the number of muscu­loskeletal problems so common in older men and women. Consider the fact that four out of five adults experience lower back discomfort. When you also consider that about 80 percent of all low back pain is muscular in nature, you get some idea of how valuable strength training could be. In an interesting study along these lines, 80 percent of low back pain sufferers were symptom-free after several weeks of back strengthening exercises. Although substantiating research is still pending, strength training may also benefit sufferers of osteoporosis and other degenerative diseases.

So where does all this leave us?

The bad news is that research verifies what we already know. As we age, we typically experience a gradual decline in our cardiovascular endurance, muscular strength, muscle mass, physical capacity, and metabolic function. These changes increase our risk of cardiovascular disease, musculoskeletal injury, and various degenerative disorders.

The good news is that regardless of age, with regular endurance exercise and sensible strength training, we can reverse these insidious processes and delay the debilitating effects of aging. The message is clear. Considering the relatively low investment in time and the high dividends in physical fitness, we should all be participating regularly in appropriate levels of endurance and strength training  And so, like the rest of us, Ron Glass has a choice: he can graduate to a larger pant size, or he can dedicate time to a regular exercise routine.

Dr. Westcott is the co-author of “Strength Training Past 50”.  Click the book for purchase information. 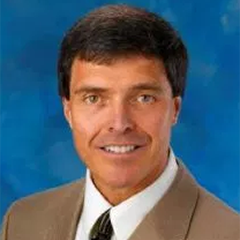 Wayne Wescott
Wayne L. Westcott, Ph.D., directed fitness research programs at the South Shore YMCA in Quincy, MA for more than 25 years. In 2006, he developed an Exercise Science Major at Quincy College, where he now teaches and conducts strength training research studies. Wayne has been a strength training consultant for numerous organizations, including the United States Navy, the United States Air Force, the American Council on Exercise, the YMCA of the USA, and Nautilus. He has authored/co-authored 25 books and textbooks, and more than 60 peer-reviewed academic papers. Dr. Westcott presently serves as an editorial advisor, reviewer, writer, and columnist for many publications, including The Physician and Sportsmedicine, ACSM’s Health & Fitness Journal, ACSM’s Certified News, Fitness Management, Perspective, On-Site Fitness, Prevention, and Shape.
More by this Author

Slowing Down The Clock

“What’s going on here?” Ronald Glass, a forty year-old businessman who weighs the same as he did in college, is understandably irritated as he